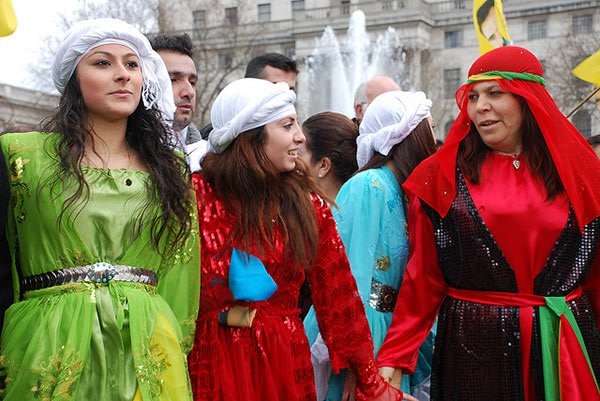 Kurdish clothing differs from men to women, and differ from country to country. Some say that you can tell which area a Kurd is from by looking at his or her clothes.

Traditional dress for women in Kurdistan consists of very colorful clothing. Usually a long dress or gown is worn, over which a jacket or vest is worn. Colorful belts are included, as are colorful pants.

Traditional shoes for Kurdish women are also colorful, and may be embroidered with beads or precious stones.

Over the years this style has changed, possibly due to religion. Today, older women wear darker and muted colors, while young Kurdish women and girls are the ones who wear the brightly colored traditional gowns and dresses.

Jewelry is common and all women, regardless of age, can be seen sporting accessories. Older women, in particular, were more expensive jewlery, especially if she has been given a large dowry from her husband’s family.

At one point in time, the quality and quantity of a woman’s jewelry implied their societal status. Today this is not entirely the case, but may apply in some more traditional Kurdish societies.

Traditional clothing for men in Kurdistan consists of baggy pants that may be colorful, but are more often muted earth tones. Men wear plain shirts, and generally wear vests or jackets over their shirts. The outfit is completed by a large belt or sash tied around the waist.

Traditional dress for male Kurds includes a turban wrapped around the head, and traditionally a dagger tucked into the large sash at the waist.

Traditional Kurdish dress is increasingly disappearing in today’s modern culture. Kurds have adopted the dress of thier host country, and are also known to be welcoming of Western dress and culture.

In Iran, Kurdish women subscribe to the traditional islamic dress, which dictates a cloth to be worn over the clothes and a hijab that covers the hair.

In Turkey, the secular nature of the government led to the banning of the headscarf in universities and jobs in the government. There are, of course, controversies surrounding this ban, but it has affected the way Kurdish women dress.

Did we miss something? Comment or add a photo below!