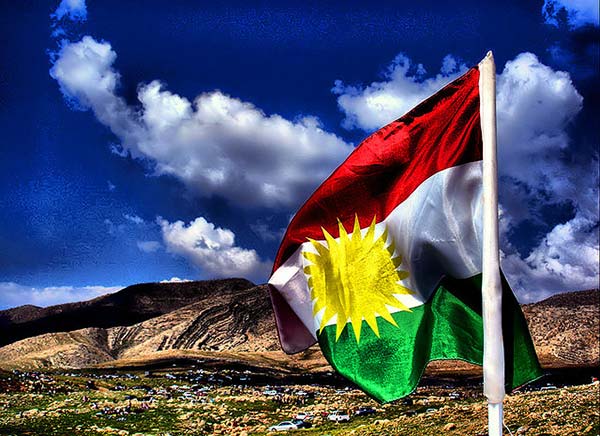 The National Flag of Kurdistan was first introduced at the Paris Peace Conference in 1920 by the early leaders of the Kurdish nationalist movement, Khoyboun.[1] Ever since the early 20th century, the Kurdistan flag has been a symbol of great national pride for Kurds in Iraq, Iran, Syria, Turkey and across the world.

Design of the Kurdistan Flag

The format of the modern Kurdish flag was designed by Dr. Mehrdad Izady,[2] and comprises of a tricolor background, and a centrally placed sun disk. The colors of the flag, from top to bottom, are red, white and green. The yellow sun disk at the center has 21 rays, equal in size and shape. Both the sun emblem and the number 21 hold religious and cultural importance in the native Kurdish Yazdani religious traditions.[3]

According to Dr. Izady, the number 21 is scared in the old Yazdâni religions: Yezidism, Yarsanism, Alevism, etc. In particular, the holy figures in those religions all are born/reborn after only 21 days of gestation. The Yazdâni faiths also believe that the reincarnation/rebirth of the soul takes 21 days from the day of passing. While designing the Kurdish Flag, Dr. Izady chose 21 rays as a symbol of the rebirth of the Kurdish nation, identity, and dignity.

History of the Kurdish Flag

A national Kurdish flag, with a coat of arms instead of a sunburst, was adopted in 1946 by the short-lived Kurdish Republic of Mahabad. In 1992, the Iraqi Kurdistan region adopted the 21-ray sunburst design of Dr. Mehrdad Izady and Dr. Bijhan Eliasi. To this day, the sunburst design remains the National Flag of Kurdistan.

While the National Flag of Kurdistan is recognized throughout all Kurdish regions, several other national flags are flown by various Kurdish political groups across Kurdistan.