Benjamin Kweskin is a Middle East analyst, independent researcher, writer, lecturer and PhD student at Georgia State University. The story below originally appeared on The Forward (theforward.com), and was republished with permission from its author.

Praying at A Jewish Tomb in the Shadow of ISIS

Back when they still lived in Iraqi Kurdistan, Kurdish Jews had a famous saying about the ancient synagogue believed to house the tomb of a biblical prophet in this beleaguered town on the high northern plateau of Nineveh province. On Shavuot [commemorates the anniversary of the day God gave the Torah to the entire nation of Israel assembled at Mount Sinai] they said, “He who has not made the pilgrimage to Nahum’s tomb has not yet known real pleasure.”

The Journey to Al Qosh

This past Shavuot I was part of a small group that may have been the first in more than 60 years to celebrate this holiday at the synagogue.

The quiet, serene village of Al Qosh is made up of mostly Assyrian Christians. It is known for its many stone homes, its seventh-century monastery and its many ancient churches. But it lies a mere 34 miles from Mosul — since June 2014, the Iraqi base for the terrorist organization par excellence known as the Islamic State. The village’s current population of some 10,000 to 20,000 has been swelled by internally displaced people from nearby villages taken over by this force of terrorists.

Several months ago, most Alqoshniyes fled for safety to Iraqi Kurdistan, the neighboring semiautonomous northern region known for its tolerant, relatively open society and for the Peshmerga, a proven fighting force against the Islamic State. It has been only a couple of months since most inhabitants of Al-Qosh and other surrounding villages have returned, following the liberation of the surrounding area by a combination of Peshmerga, local Christian militias and U.S.-led coalition airstrikes.

Still, Al-Qosh sits in close proximity to the ongoing fighting, and those who live even closer to Mosul have not been able to return to their homes. Indeed, much of the Nineveh Plains is either still under the Islamic State’s control or its threat.

Kurds and Jews have a fascinating shared history with roots in ancient times. Many date Jewish presence in what is today Kurdistan to the eighth-century B.C.E., when the Assyrian Empire — ancestors of the same friendly Assyrian Christians who are today under threat — conquered the Northern Kingdom of Israel. The conquerors took thousands of Israelite captives into exile, to the “cities of the Medes” — that is, the predecessors of the Kurds. There was even a Jewish kingdom based in Erbil in the first and second centuries, called Adiabene, or Hadyab. During the Roman occupation of Judea, the kingdom’s rulers sent provisions, weapons and even soldiers to help their fellow Jews. After Judea fell, the Romans headed east, and when the Jewish emperor of Hadyab was overthrown, his family and advisers fled to Hamadan, in neighboring Iranian Kurdistan, where the reputed shrine of Mordechai and Esther remains today.

I first focused on the Kurdish narrative academically, but this grew into something much greater than I ever anticipated. Though overwhelmingly Muslim, most Kurds stress their Kurdish identity strongly, and some of their cultural norms diverge from orthodox Sunni Islamic practices.

Newroz, for example, the Kurds’ traditional new year holiday, parallels the pre-Islamic Persian new year celebration at the start of spring and is the Kurds’ most important holiday. It predates Islam by at least 2,000 years, and features many pre-Islamic customs, such as large bonfires and co-gender dancing. Additionally, the centerpiece of the Kurdish national flag is a 21-ray golden sun — a symbol of the pre-Islamic, Zoroastrian and Yezidi minority religions. For centuries, Islam in Kurdistan has been known for Sufism rather than for radicalism. This is still the case today.

The Shrine of Nahum

This would be my fifth visit to the shrine of Nahum, a prophet of the Israelite exile who famously predicted the destruction of Nineveh, the Assyrian Empire’s mighty capital, in the seventh-century B.C.E. For me, it was just as meaningful as the first time. 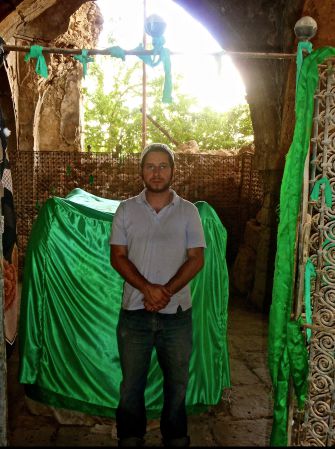 The author at the tomb of the prophet Nahum, during Shavuot. Image Credit: Whitney Kweskin

This 2,500-year-old synagogue is the only Jewish structure still standing in northern Iraq. It is the most prominent and visible reminder still standing of Kurdistan’s 3,000-year-old Jewish history. Yet it is not well known to the Iraqi public. It was a good friend — an expat who had been living in Kurdistan for several years — who first told me about the synagogue’s existence. I went, and was entranced.

The four of us walked excitedly to the home of Nasir, the man who watches over the synagogue. He recognized us, despite it being more than a year since we had seen him, and gladly walked us over and opened the padlocked gate to the courtyard. Nasir’s family has been watching over the synagogue for two generations, at the request of the last rabbi in Al-Qosh, who left with his family for Israel in the early 1950s.

After entering the building, the four of us walked around by ourselves for a few minutes. The two Jewish males — myself and the teacher from the West Coast — donned kipot . My wife took out her two candles as I readied my Israeli-purchased yahrtzeit candle to usher in this auspicious holiday. Our new American Jewish friend, making his first visit to this site, was overcome with emotion as he entered the building. Largely talkative during the car ride to Al-Qosh, he quickly grew silent and contemplative.

After the lighting, standing next to the prophet’s tomb I read aloud the prayer recited when people arrive at the tombs of tzaddikim , righteous people. Overlooking us as I read aloud was a clear Hebrew plaque, one of several dispersed throughout the synagogue, detailing its history and significance as Nahum’s burial site. After a calm silence, the three of us quietly parted ways, stretching out to different corners of the shrine, searching for our own personal prayer.

A Monument to Jewish-Kurdish History

Though the synagogue is half rubble and long emptied of its most important articles and artifacts, it is still easy to imagine the site in its original splendor; the building is quite large and once included a second floor, as well as a large courtyard. In the center of the worship area stands an ornate, four-sided gate that is easily opened. Inside the gate is a wooden box covered with multiple layers of green cloth. It is in this place that, according to tradition, the remains of Nahum lie — or used to. Over the centuries, successive attacks on the synagogue led the Jewish communities’ Assyrian Christian neighbors to remove the site’s remains for safekeeping in a nearby church. In any event, what actually lies in the resting place at either site is, at the least, a matter of legitimate historical debate. While there were initial attempts to renovate the synagogue several years ago, nothing substantial has materialized. The structure remains as precarious as ever. 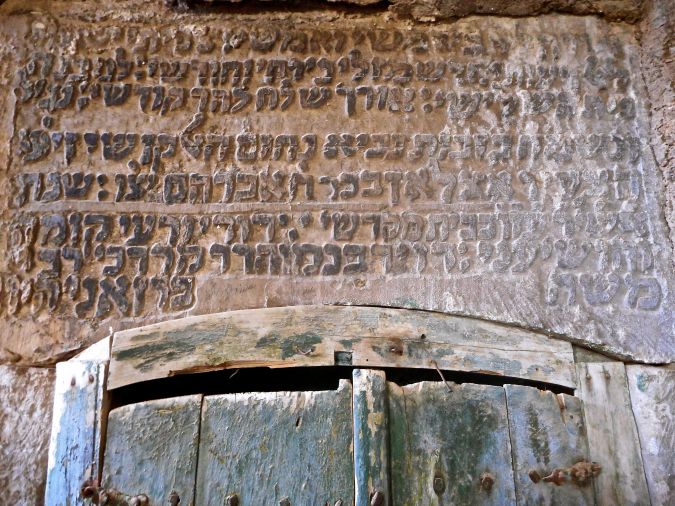 Bidding farewell was an emotional and bittersweet experience; I wanted to somehow protect the site and sit there for hours, daydreaming about joyous prayers, singing and dancing in colorful outfits. I wanted to continue daydreaming about hearing the Torah being taught to those who had gathered for such a celebration. I thanked God we were able to travel in peace, and asked that we be returned safely as well. After my simultaneous prayers and daydreams concluded, I wondered when I would return to such a holy place, and if the synagogue would last another year.

[Read the entire article at the Forward]